The purpose of this document is to detail the Infill inside ChopChop3D Slicer:

The infill is a repetitive pattern used to "fill" the part. It has different purposes for instance: the strength of the part, the aesthetic of the visible flat surfaces.
ChopChop3D Slicer implements common 2D infills with its own way:

Since you can customize in several places the parameters of the extruder, a Default Extruder is defined allowing to speed up the configuration setup, you can define in one place and you propagate as required.

The Quick Slicer is implementing the default policy as found in many slicers: the extruder nozzle size is used as the extrusion width, then you set the percentage of the infill from which the distance is obtained.

The Default Extruder applies by default to Top/Bottom, Infill, Raft Infill.
It is defined by the various settings found for instance in the tab for the Speeds, the Temperature, the Retraction. There is the button Use Default Extruder that can propagate its parameters across all printing phases: it saves time and it reduces the risk of mistakes when you create/edit a profile.
The Top/Bottom infills are set in the Core/Top/Bottom tab, and the Infill is set in the Core/Infill tab. The rotation of those infills are alternated by default to -45 and 45 degrees layer by layer.

For Support Infills, we use the distance metric approach by default: you always have a pair Infill/Extruder explicitly defined. You can easily propagate the Default Extruder if needed, for any support infill there is an associated button Use Default Extruder available.

If you want to use the distance metric approach for either Top/Bottom or Infill, you can always use an Advanced Infill that can be set inside the appropriate tab. We detail this further in the Advanced Infill section.

The Slicer is implementing the distance metric approach: it is a pair Infill/Extruder. The Infill is always defined through the same Infill dialog box that we detail just after. The Default Extruder is available at the Layers tab. When you edit a layers range, the infill parameters are available in each associated tab: Top, Bottom, Infill ...

The infill dialog contains a tab for each kind of infill, the selected tab is the infill you are using, if you want to change it you simply change the tab or you edit any shown parameter.

The line infill is a line where both ends are attached to the shell of the part. 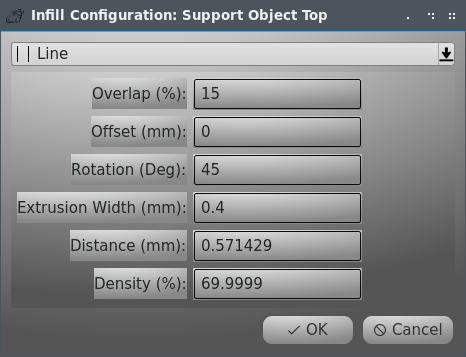 Follows the description of the parameters: 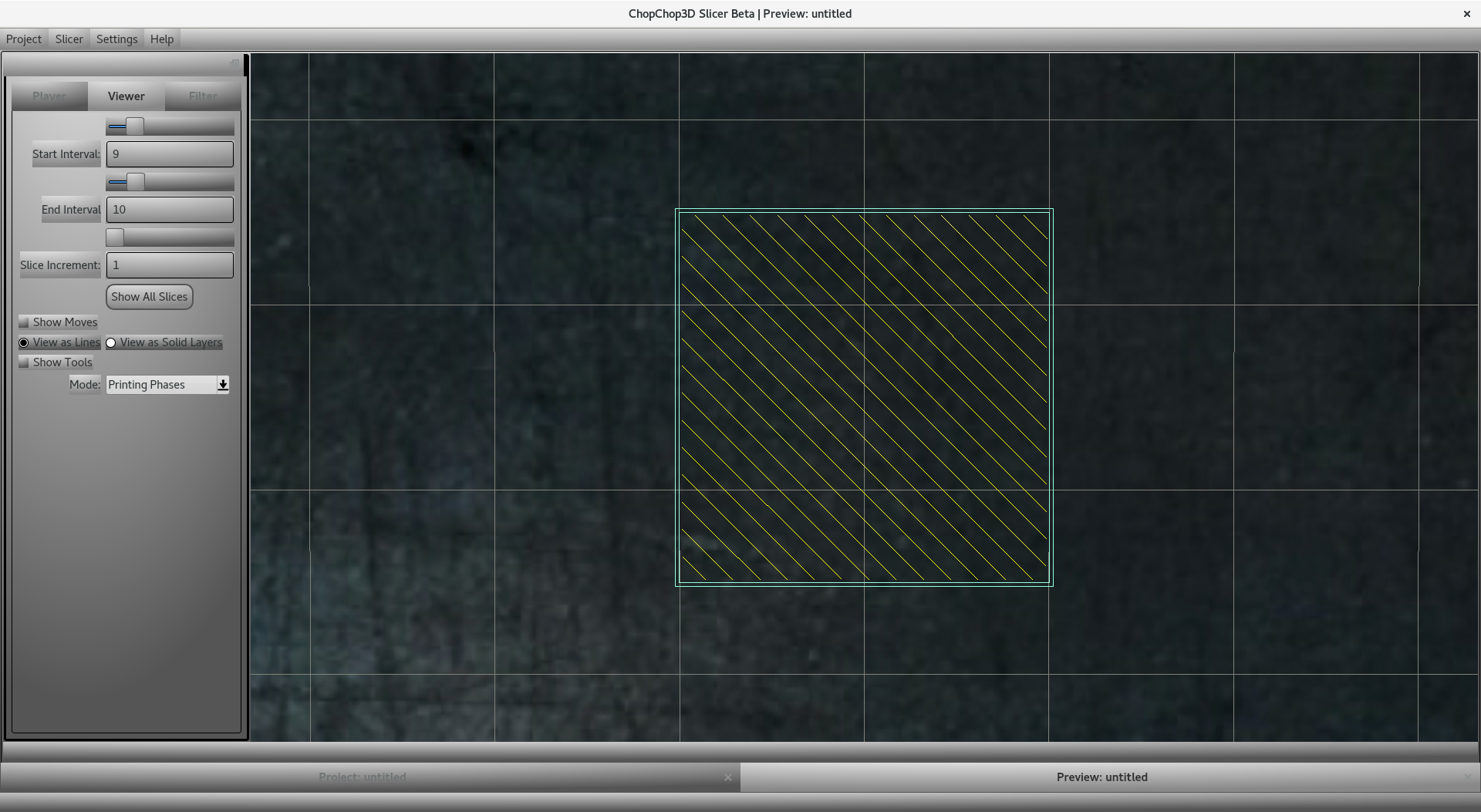 The ZigZag infill is a line infill where alternatively ends of successive lines are following the perimeter of the part.
Parameters are detailed in the Line infill. 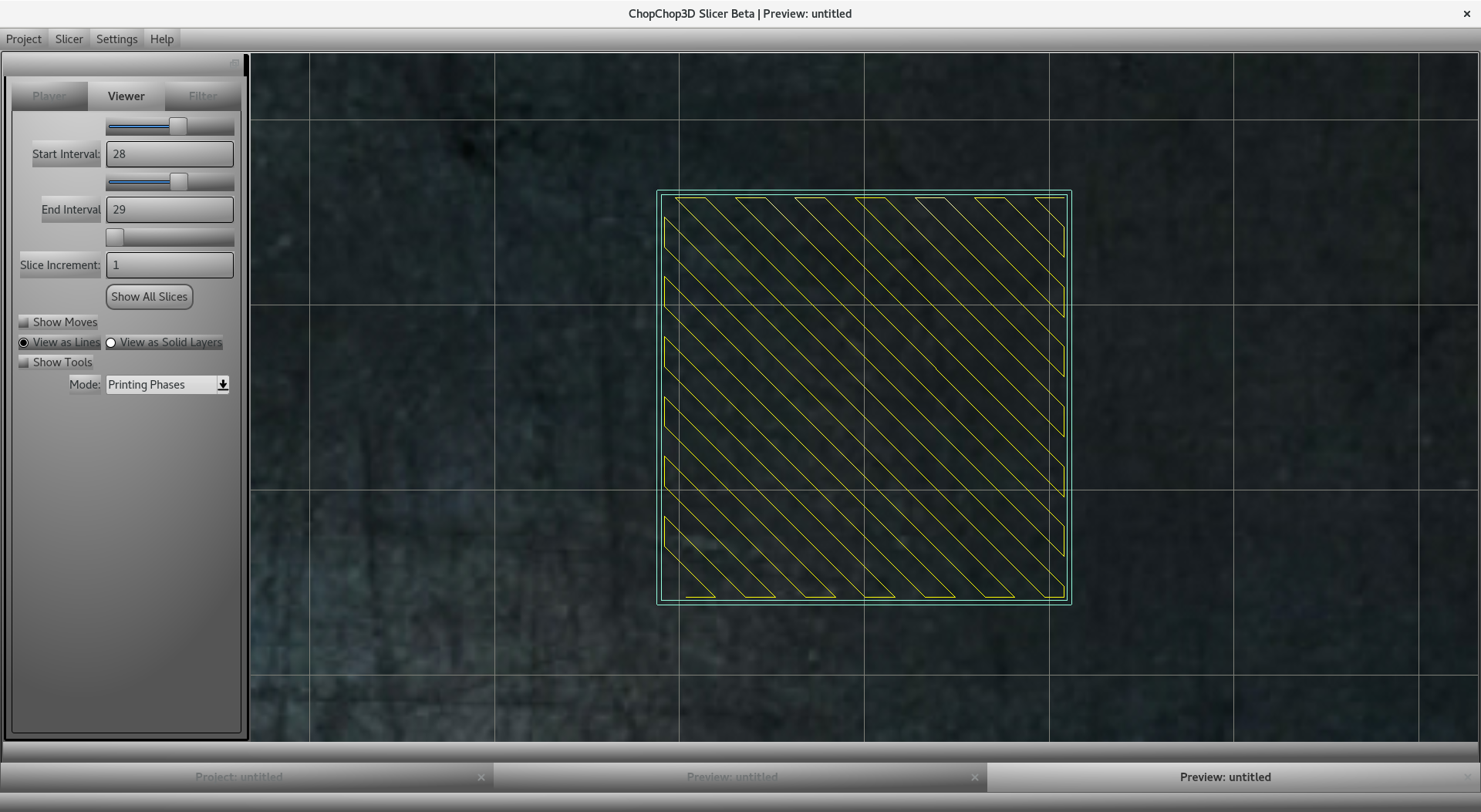 The grid infill is just the composition of 2 line infills. The core idea is that you have the freedom to define it as you want.
You can set for each line its own set of parameters through the use of each button that will pop-up the set of parameters for the given line, for the moment we assume that there is the same extruder for both.The density is just the combination of densities of each line.
Parameters for each line are detailed in the Line infill. 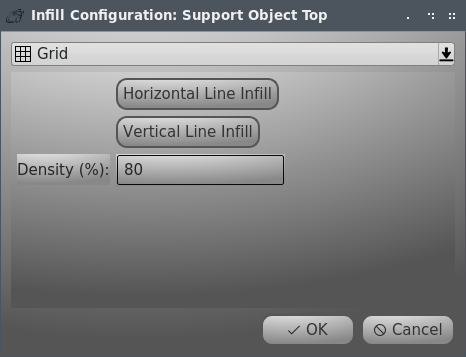 The default grid infill found in the Quick Slicer. 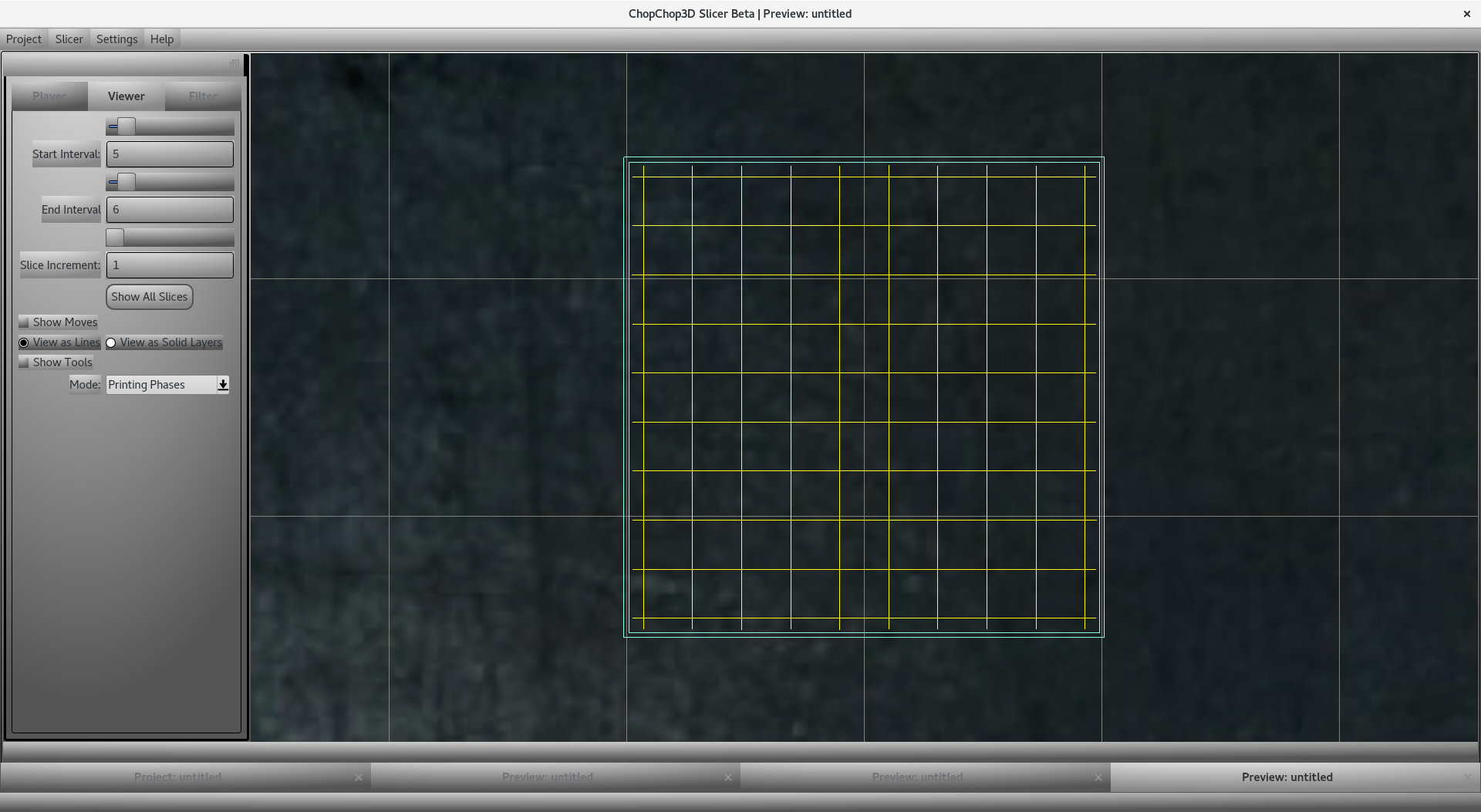 An example of custom grid infill with a dense one and a sparse crossing one. 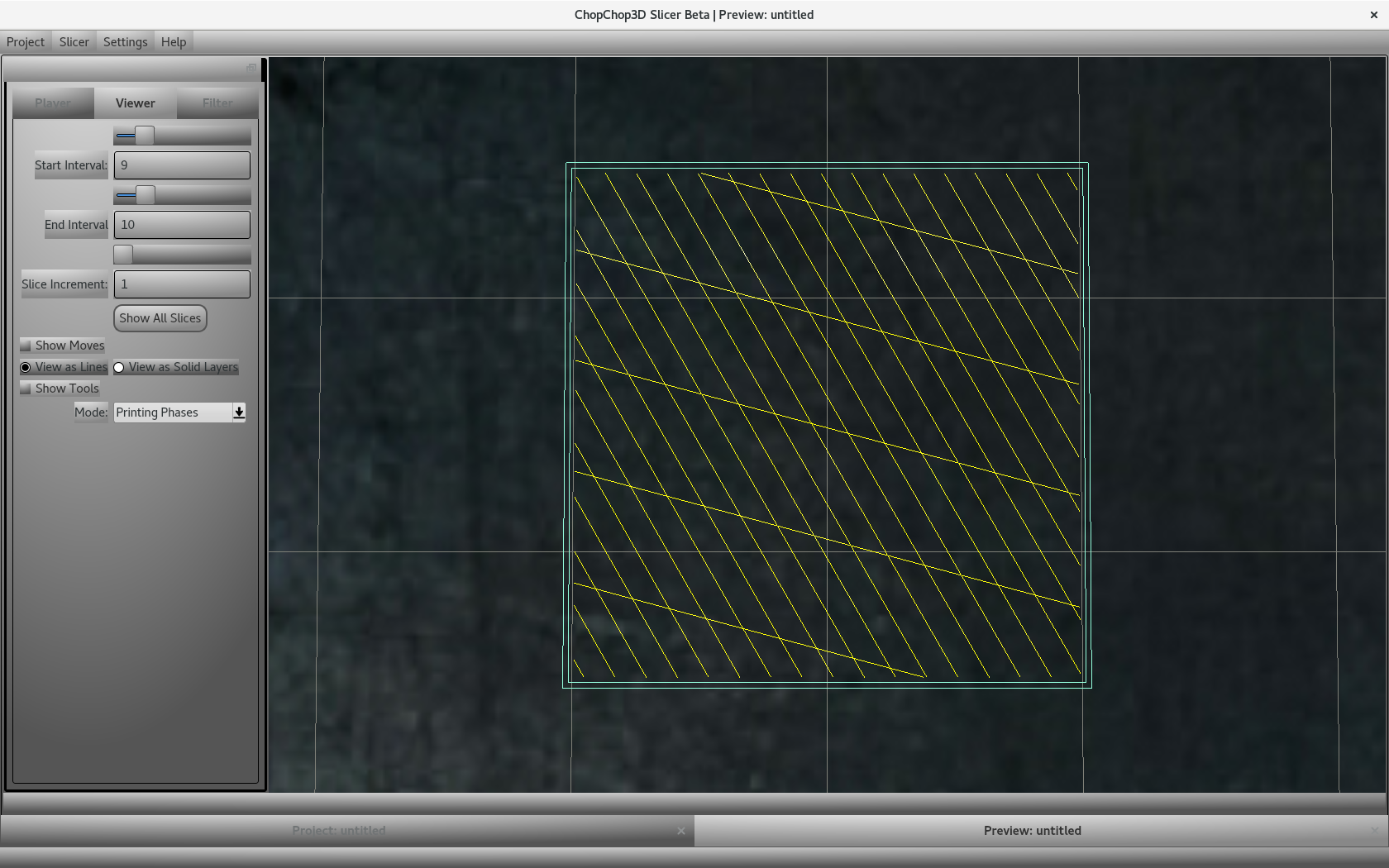 The triangle infill is the composition of 3 line infills.
You can set for each line its own set of parameters, for the moment we assume that there is the same extruder for the three of them.
Parameters for each line are detailed in the Line infill. 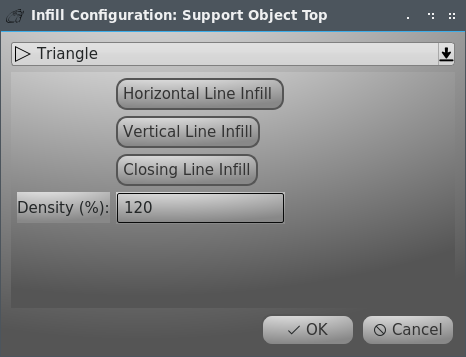 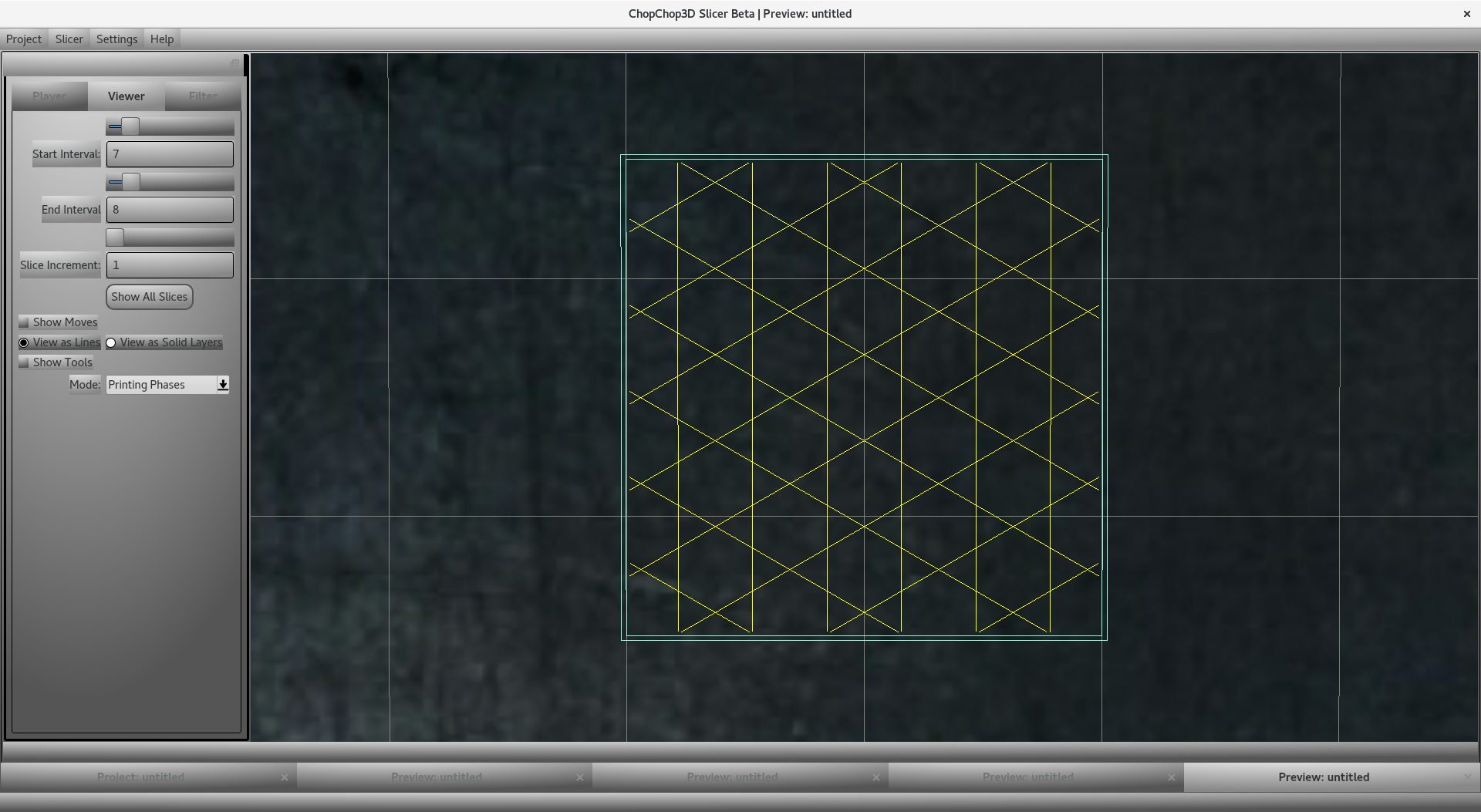 The hexagon infill is defined as follows: 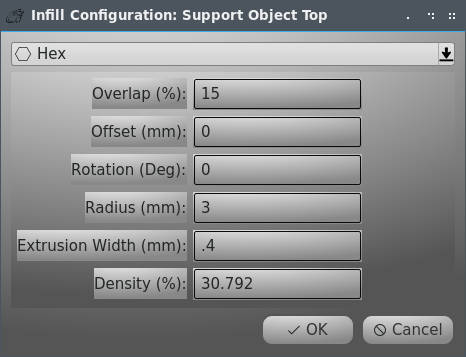 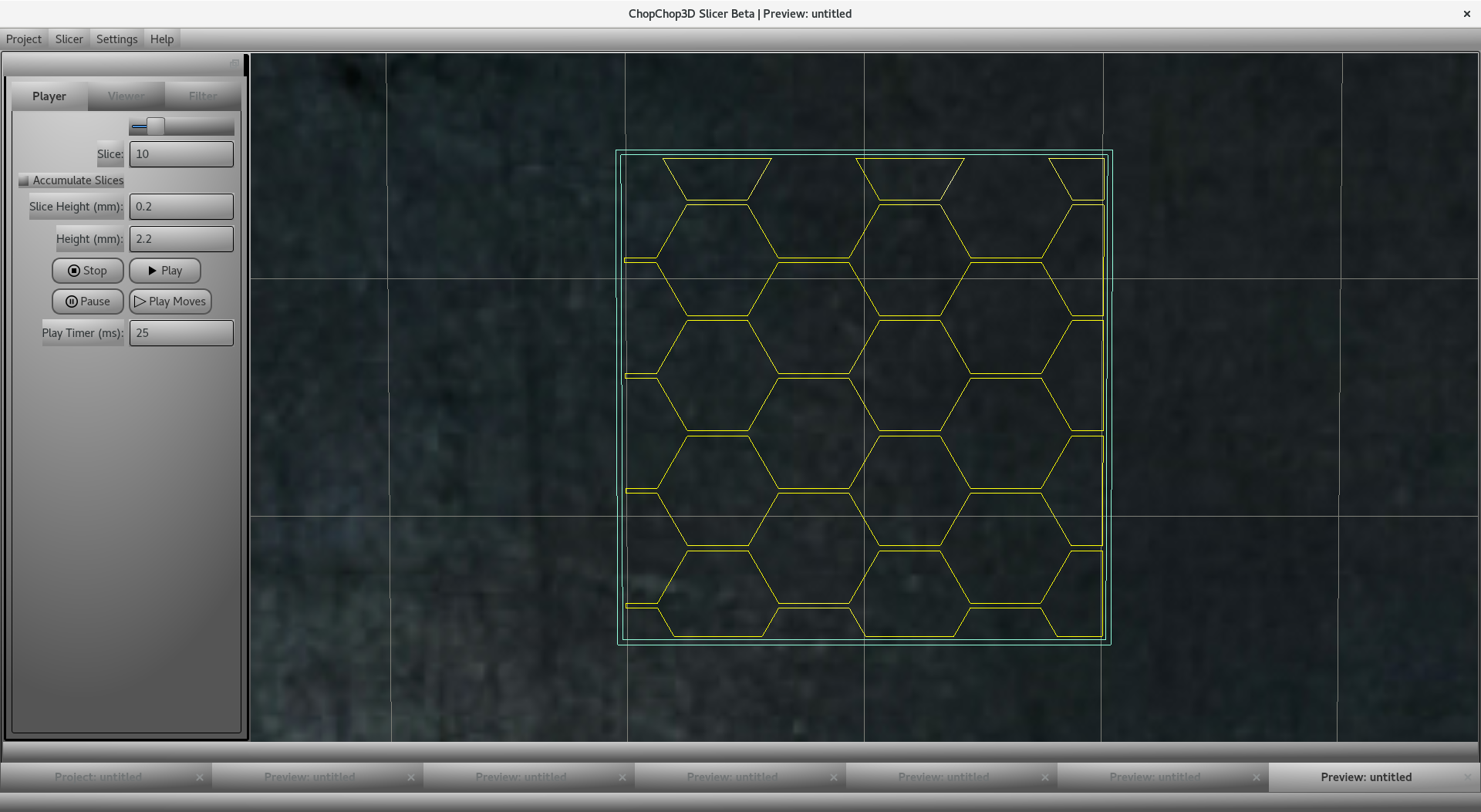 It is a variant of the hexagon infill with a different pattern than the hex infill, generating a coarser structure with larger "lines". 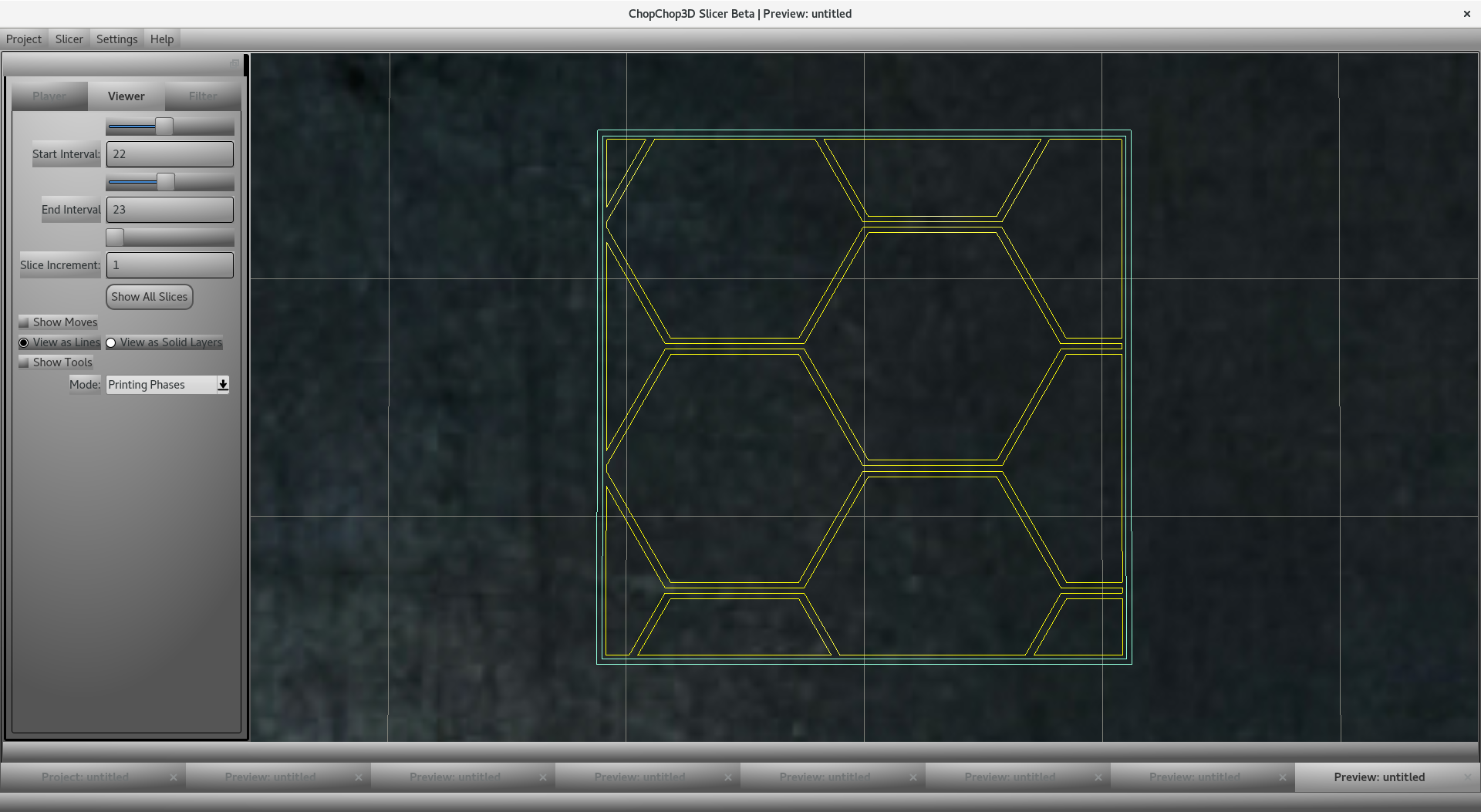 The concentric pattern follows the shell pattern by progressive offsetting. Only the following settings are taken in account: 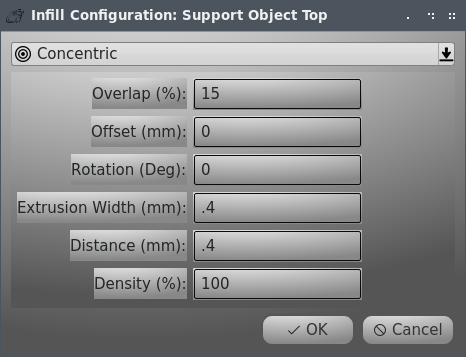 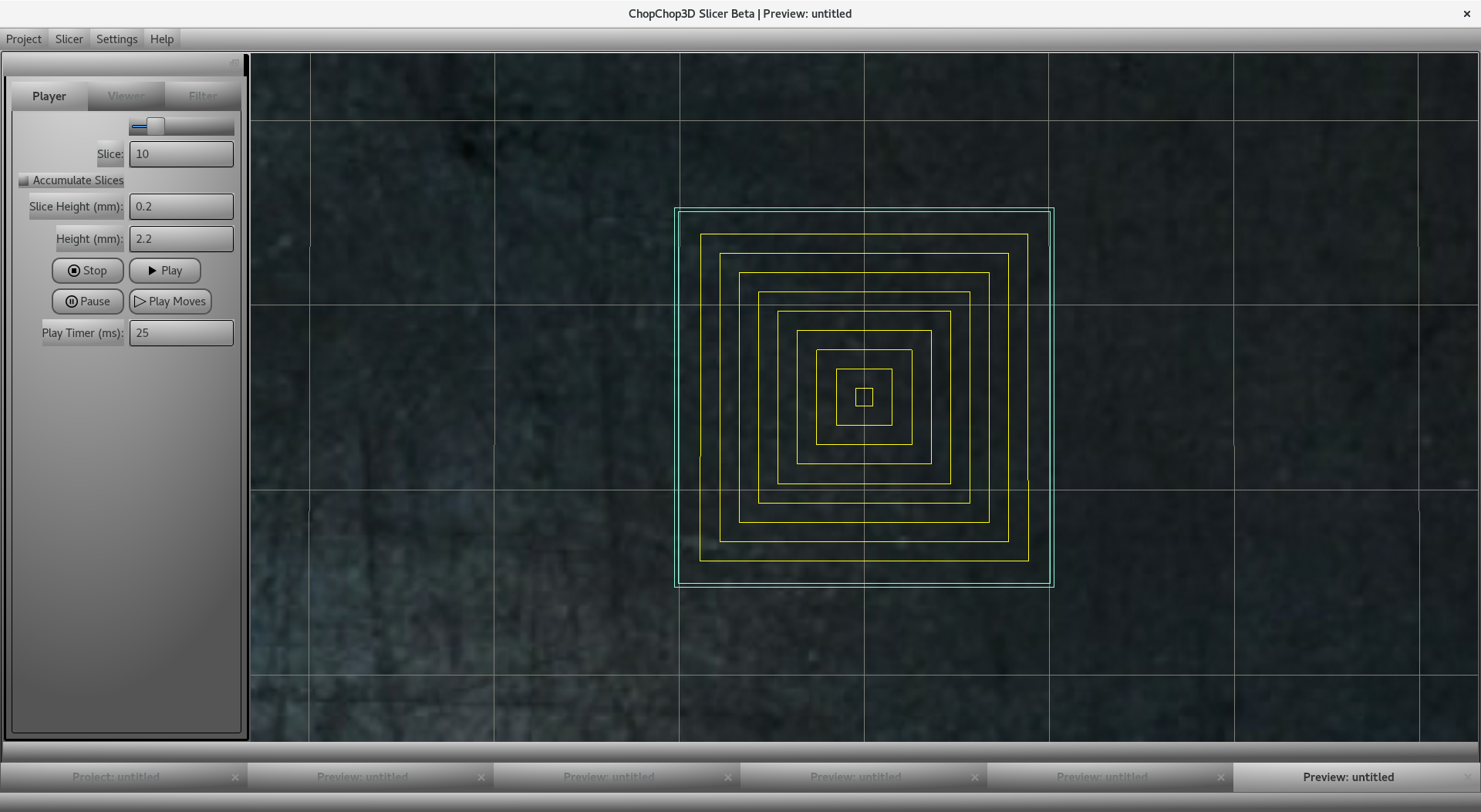 It is a variation of the ZigZag pattern where ends are joined by half circle instead of following the shell. It can be used for supports. 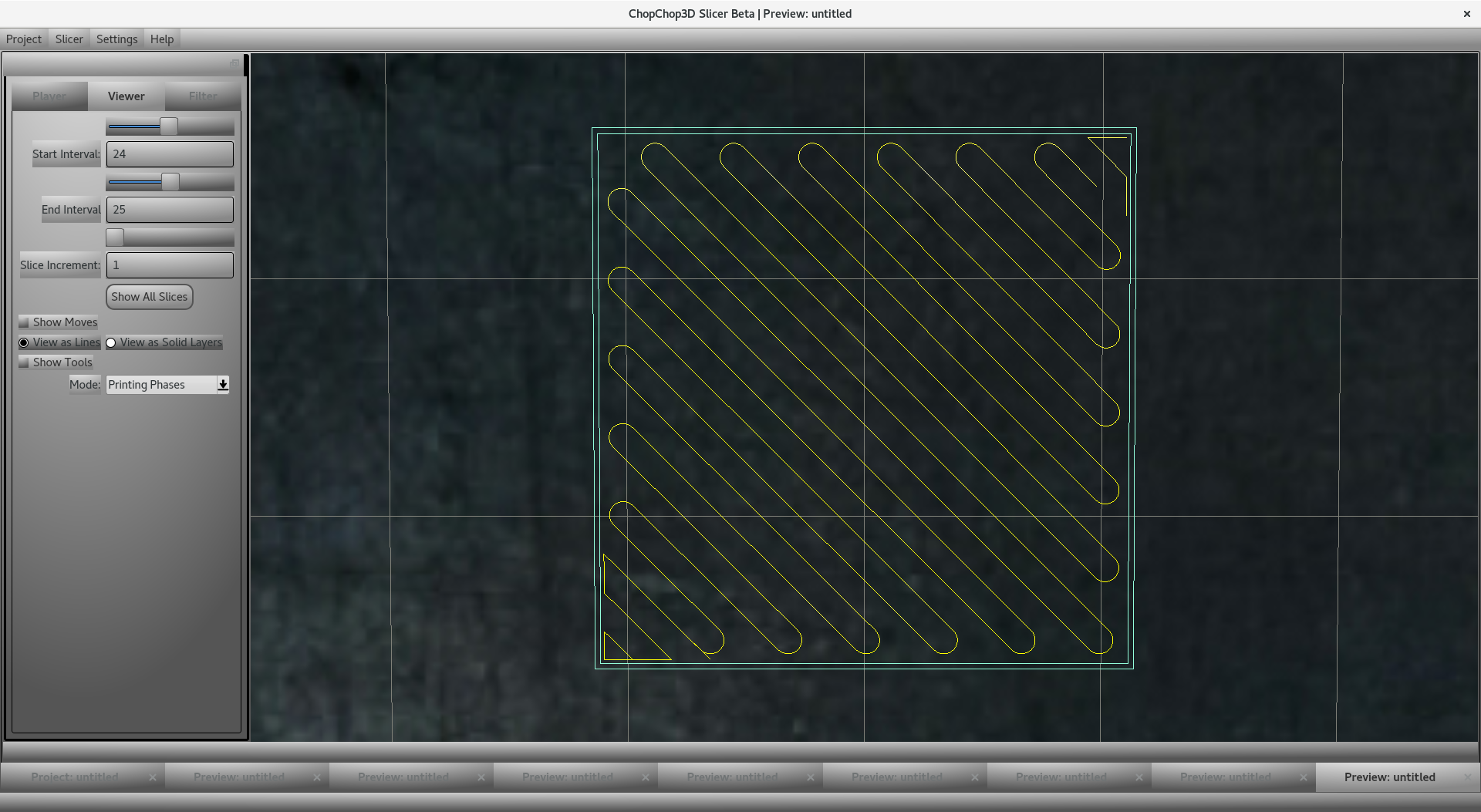 BETA STATUS: still some issues, avoid to use until this statement is removed.

An Advanced Infill is an ordered list of Infill/Extruder definitions that are applied one after each other given the slice index. This feature can be applied in the context of the Top/Bottom or Infill print phases.
When you perform a right click you have access to the contextual menu. 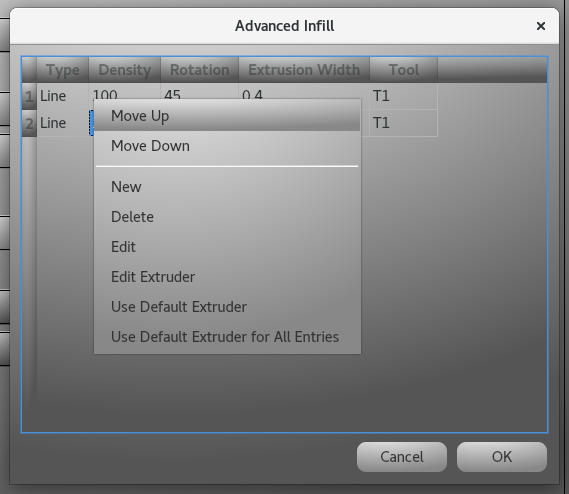 For each Infill there is a an Extruder/Tool definition attached to it. You can edit the GCode section of the Extruder to set the tool and the tool change required. If you are using the Quick Slicer, you will need to setup probably an Advanced Infill in case you need to customize Top/Bottom, Infill. For further details check out the Extruder document.